Analyze and recognize anchor texts by more than 20 different parameters with Anchor.ly - the essential SEO tool for link builders.

Save your time, money & energy with Anchor.ly! 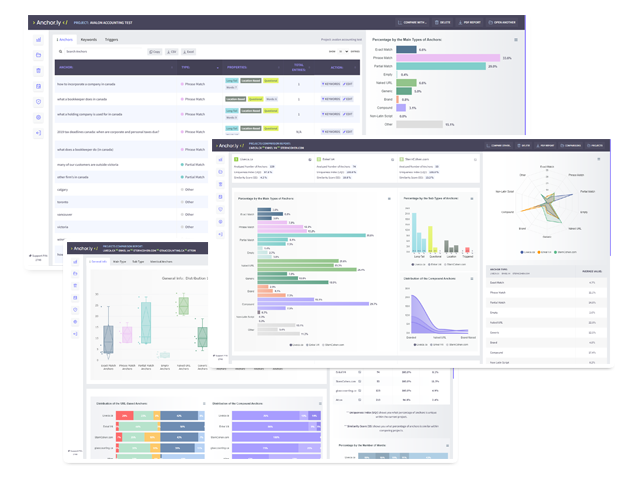 Optimize efficiency of the SEO staff

Add a new revenue stream to your business

Get the higher accuracy for lower price

Improve the quality of service delivery

Use the data to perform experiments

Show your clients what you have done

Look for over optimization signs

Why did we decide to create Anchor.ly?

In the SEO field, we resort to the collection and analysis of various statistical data. One of the cruel tasks is the anchor texts distribution analysis. It's no secret for all that Search Engines analyze the quality and relevance of the source. But do you know that they are also doing the deep anchor texts analysis?

If you try to analyze the backlink profiles of the Top-10 websites, it will take a couple of weeks. The most annoying and exhausting part will be to do the cross-reference of anchor texts and a bunch of keywords. As we work in the SEO niche also, we did it before a lot of times, and forever after we promised that nobody will do it anymore by hands. So, we gathered the Web Development & SEO teams and started creating a powerful script that could do it instead of us. That's how was appeared the idea and the first version of Anchor.ly for internal use.

Who should use it?

The top-level SEO specialists understand the value of the proficiently created link building strategies. The wrong actions will cost a traffic or may give a nothing at best. If you want to have a look into the real anchor texts picture instead of mythical "50% naked URLs", then you are in the right place. Our solution is fully satisfying requirements.

How it's started & how it's going

At the beginning of June 2021 we received the first paid subscription.
Our first client became one of the leading companies in the SEO market - HigherVisibility.com. Thank them very much for that.

On February 26th, we officially launched the project and published it on ProductHunt.com with a 100% discount coupon. Over the next three months, we've been working on feedbacks and fixing our mistakes.